Off-grid solar systems have a number of advantages in developing countries, but they rely on the capacity of private entrepreneurs to develop a reliable customer base and methods for recruiting these customers. This study uses data from 68,600 customers of BBOXX, a London-based off-grid solar power company, to classify customers and explore the demographic and recruitment factors associated with customer behavior. We compare a non-parametric clustering method for customer segmentation with linear models of customer behavior. The results show a number of important demographic and geographic factors that influence recruitment of the company’s core customers, and demonstrates how linear models can be misleading. For example, women and those recruited by agent advertising or word-of- mouth are more likely in the company’s core clientele, even though the linear models suggest that they may be less profitable customers. 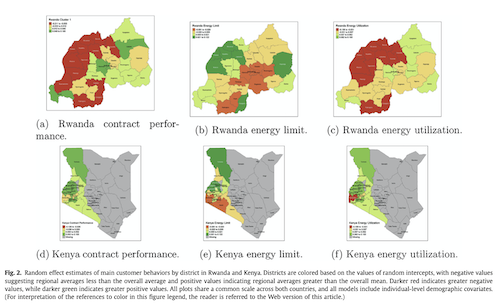 Over the course of the period from the heyday of McCarthyism to the present, the percentage of the American people not feeling free to express their views has tripled. In 2019, fully four in ten Americans engaged in self-censorship. Our analyses of both over-time and cross-sectional variability provide several insights into why people keep their mouths shut. We find that: (1) Levels of self-censorship are related to affective polarization among the mass public, but not via an “echo chamber” effect because greater polarization is associated with more self-censorship. (2) Levels of mass political intolerance bear no relationship to self-censorship, either at the macro- or micro-levels. (3) Those who perceive a more repressive government are only slightly more likely to engage in self-censorship. And (4) those possessing more resources (e.g., higher levels of education) report engaging in more self-censorship. Together, these findings suggest the conclusion that one’s larger macro-environment has little to do with self-censorship. Instead, micro-environment sentiments—such as worrying that expressing unpopular views will isolate and alienate people from their friends, family, and neighbors—might drive self-censorship. We conclude with a brief discussion of the significance of our findings for larger democracy theory and practice. 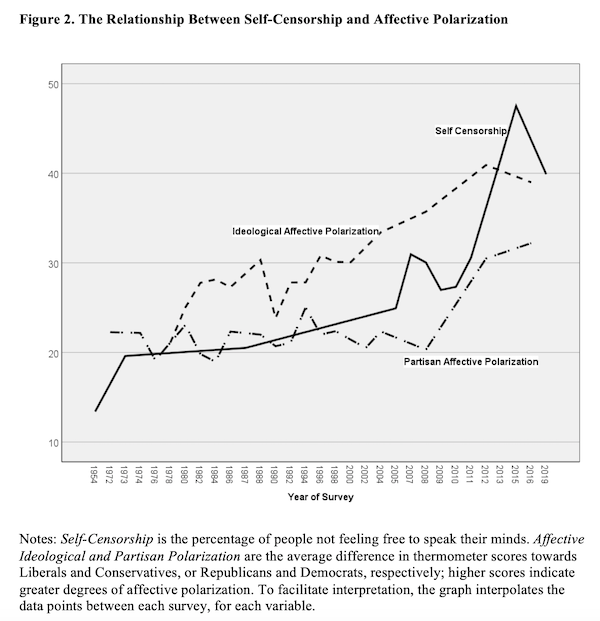 Scholars have reached mixed conclusions about the implications of increased political polarization for citizen decision-making. In this paper, we argue that citizens respond to ideological divergence with heightened affective polariza- tion. Using a survey experiment conducted with a nationally representative sample of U.S. citizens, we find that increased ideological differences between political figures produce increasingly polarized affective evaluations, and that these differ- ences are especially large among respondents with stronger ideological commit- ments and higher levels of political interest. We provide further support for these findings in an observational study of citizens’ evaluations of the U.S. Senators from their state. We also find that the polarizing effects of ideological differences can be largely mitigated with biographical information about the public officials, which suggests that the pernicious consequences of ideological polarization can be over- come by focusing on matters other than political disagreement. 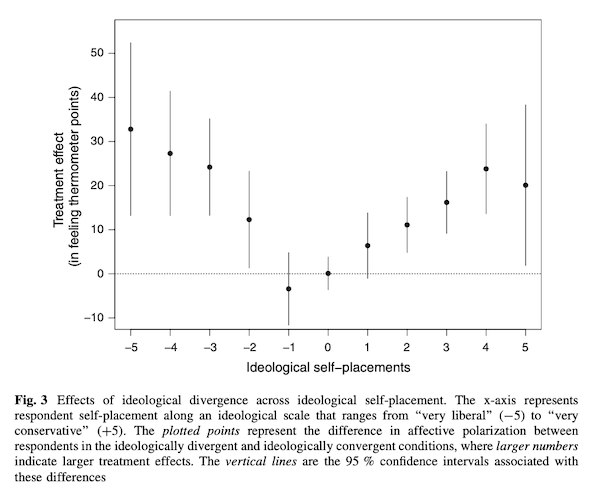 The Effect of Gender, Party and Seniority on Interruptions at Congressional Hearings (with Michael G. Miller)

We examine speech patterns during more than 25,000 committee hearings in the United States Congress from 1994 to 2018 to determine whether women are more likely to be interrupted than men. We find consistent evidence that women are indeed more likely to experience interruptions when they are speaking. This effect is especially strong among Members. Further analysis of speaker dyads suggests that this effect is driven by mixed-gender interactions; women are both more likely to be interrupted and more likely to interrupt, but these effects diminish significantly when two women are speaking to each other. We also consider the relationship between gender and interruptions under various legislative circumstances, and across the range of Member ideology; without exception, the core results endure. 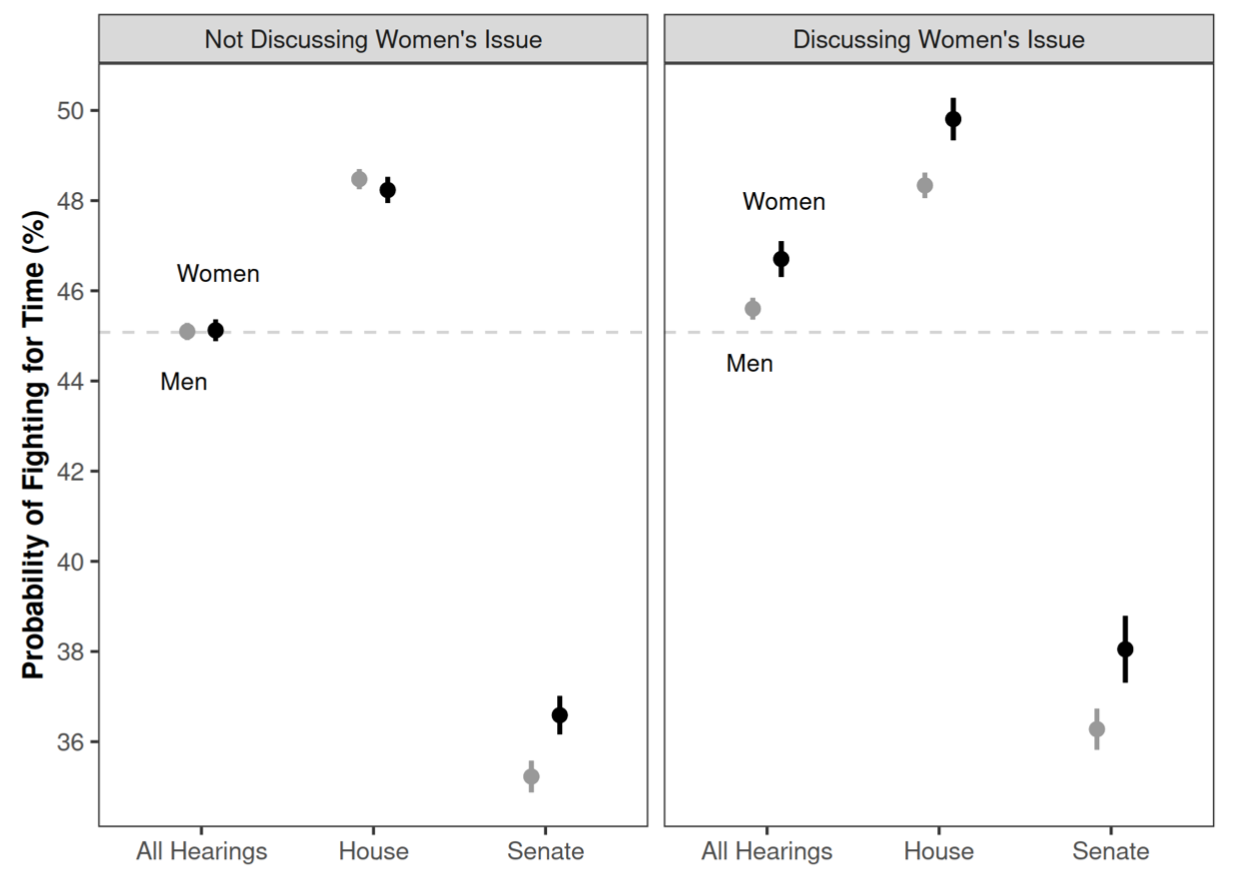 In recent decades, national factors (such as the president’s popularity) are increasingly predictive of electoral outcomes, at both the congressional and state level. We test whether the nationalization of state policy agendas is a contributing factor to the nationalization of gubernatorial elections. We measure the state agenda, by gathering governors’ State of the State (SOTS) addresses from the 1960 to 2016. Our analysis shows that state agendas have become more similar to each other over time, that state agendas are more similar to the national agenda (as laid out in the State of the Union – SOTU – address), and that the similarity between the state and national agendas predicts the degree to which national factors influence gubernatorial elections. Our results suggest that voters still engage in issue voting and that the nationalization of gubernatorial elections represents a rational response to the choices that voters face. 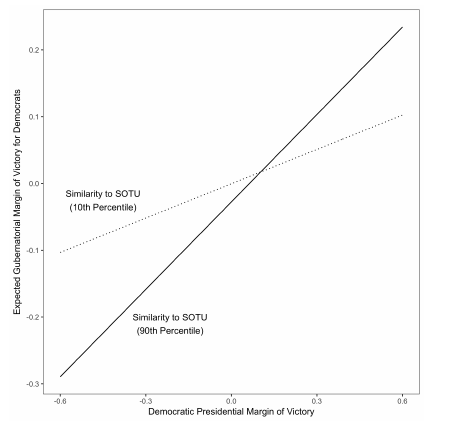 Can States Govern Effectively When Politics Are Nationalized?

The results of three studies are presented. The first introduces campaign surrogates – those who hold rallies on behalf of a candidate – and estimates their effect on county-level vote shares in the 2012 presidential election. The second demonstrates how campaigns deploy their scarce resources to maintain dynamic equilibrium, and how perturbations of that equilibrium might affect popular support for the candidates. The third study experimentally manipulates the information introduced by campaign events to gain intuition on why they are effective. The findings from these studies supplement the discussion of whether campaigns matter, and they further our understanding of strategic candidate interaction and voter behavior. 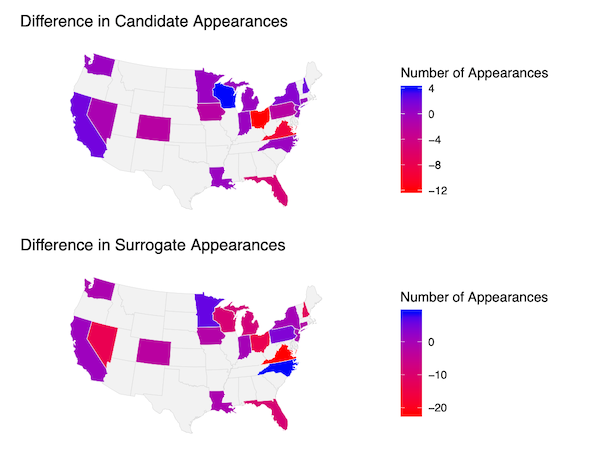 A Theory and Method for Pooling Naturally Distinct Corpora

This paper concerns the theory and method for why we should be able to use, pool, and compare the computer-generated codes from these naturally distinct text corpora to study nationalization. I propose a theoretical framework with which the researcher may defend the pooling of corpora, and introduce an empirical approach to testing for absolute comparability, the delta-statistic. While statistics like the Akaike Information Criterion (AIC) and penalized log likelihood can help the researcher to determine if a model fits the pooled corpora better than the corpora separately, the delta-statistic relies on a strong theory of latent traits to evaluate the absolute quality of a pooled model. This is especially important when it is impossible to evaluate ground truth fit because some data are unlabeled. 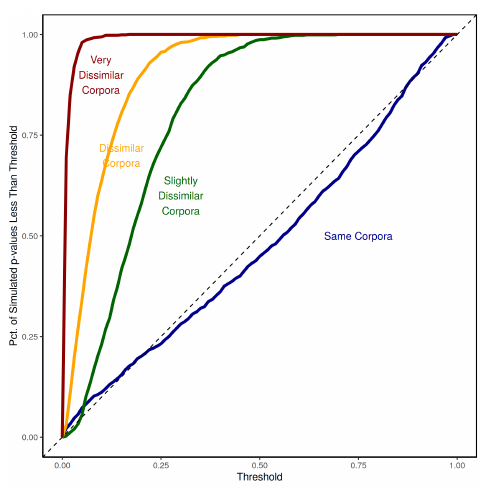 My principles are twofold. First, we will not be saved by big data—we will be saved by the analytical techniques that allow us to draw actionable, clear insights from them. Second, a method is only as useful as the substantive conclusions you are able to draw because of it. At the core of my research is an obsession with understanding how the digital transformation of our society – first niche television, then the internet, now cell phones and predictive personalization at scale – has changed both the actual distribution of power in our society, and the way we study this distribution of power. The agenda I pursue to satisfy this obsession is held up by an applied leg and a methodological leg.

My applied studies focus on political behavior, which includes topics of polarization, nationalization, and self-censorship. My greatest interest is in the present phenomenon of affective polarization, in which voters express extreme dislike for each other on the basis of political in and out-groups, without reasoned concern for issue disagreement. One of my favorite findings, which Jon Rogowski and I published in the journal Political Behavior, is that we may be able to overcome affective polarization by presenting individuals with “humanizing” information about the other side. The RCT suggested that when voters were treated with small vignettes about the out-group’s day-to-day life, even the most extreme haters came around and moderated their evaluations of the out-group. Due to partisan sorting, issue consistency, and economic trends in technology and inequality, perhaps we just don’t see enough of the other side these days.

My methodological research demonstrates how big data methods, particularly analyses involving machine analysis of text, can introduce non-ignorable bias and inefficiency into results and undermine conclusory exercises. I then develop theoretically supported frameworks to overcome this bias and inefficiency, and derive statistical methods to operationalize them. The subject matter is part of the emerging field of computational social science, which combines data science, politics, and economics to conduct research at scale.